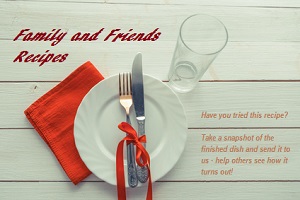 Place peach halves and syrup in a 9″ round metal cake pan, pitted side up. Sprinkle cinnamon on each peach.

Broil 2 minutes or just until heated through. Watch carefully so they do not burn.

Transfer to a serving dish or individual custard cups. Spoon hot peach syrup over each peach. Serve immediately as a side dish to ham or pork roast.

Also makes a nice dessert when topped with a dollop of vanilla ice cream.