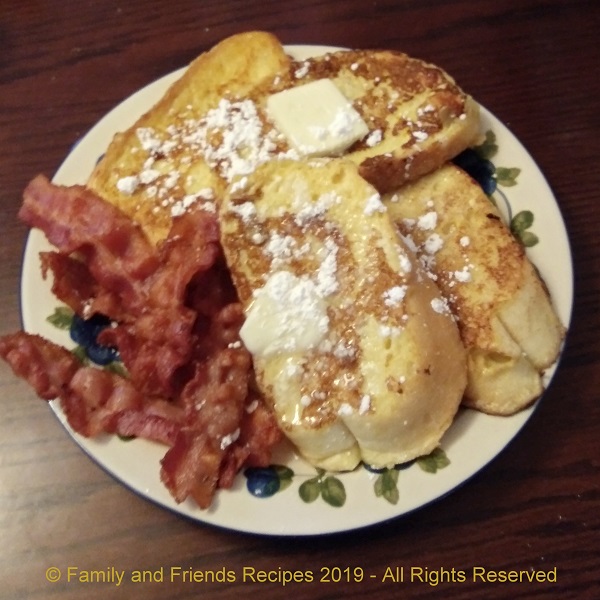 Preparation:
In a large, flat bottom bowl, stir the eggs to break the yolks. Add the milk and vanilla and stir well.

Heat a large non-stick skillet with the bacon grease until a tiny drop of batter sizzles.

Place a slice of bread in the egg batter and use a fork to submerge it for about 10 seconds, then flip it over and submerge it for another 10 seconds. There should be a few air bubbles rising to the surface as the egg mixture soaks into the bread.

Repeat the soaking and cooking of individual slices until the bread or batter is used up. Add a little more bacon grease, if needed.

Serve warm, with a pat of butter on each slice and a sprinkle of powdered sugar on top, along with your favorite breakfast side meat or fresh fruit.

Some people prefer to substitute maple syrup for the powdered sugar. It is just a personal preference – both are nice!

A bit of trivia for you: “French Toast” actually predates the founding of France – old recipes have been found for this dish all the way back to the Roman Empire when it was called “Pan Dulcis.” It became very popular in 5th century England, where is was called “Pain Perdue,” which means “Lost Bread,” because they could use stale bread in the milk and egg batter rather than waste the bread or toss it out.